The shrill call of the alarm clock woke me at 5.10am. I leapt out of bed, groggy, but with no second thoughts. The question mark was there hanging over my head.

How far would I, how far could I run today?

I’d been plotting this micro adventure for weeks but today it was real and tangible. Perhaps I’d burn out after 20 or 30 miles and trundle home, tail between my legs, and have to rethink this whole foray into ultra-running.

On the other hand, the experience could be fantastic.

I could see how far along the river I could get. How far away from central London I could run in one go. I could push myself to see how my body would hold up to running long, long distances. I could test my nutrition strategy, my kit and record the whole route for posterity.

I left at 6am on the dot, still feeling bleary eyed and weighed down by 3 litres of water, flapjack, energy bars/gels and 2 pork pies in my camelbak. Running super slowly didn’t come easily at first and I kept having to deliberately tell myself to slow down and pace myself for the long haul. Soon I settled into a rhythm and for the most part had the south bank of the Thames to myself. Landmarks like the Millennium Bridge, the London Eye and the Houses of Parliament came and went and I reached Battersea park shortly after 7am.
 
Albert Bridge, Battersea Park

The next milestone was Putney, about 10 miles into the run, and the beginning of some really fabulous trail running along the river. It was a joy to leave the tarmac behind and pad along the gravel tracks sheltered from the warming sun by the archway of willows, ashes and horse chestnuts along the bank.
 
Thames trail near Kew

At mile 20 I started to feel pretty hungry and hankered after something other than energy gels or bars. Time for the pork pie! 500 calories of savoury goodness with plenty of salt. It was simply an experiment to see how they tasted vs. how they fueled me. Well, seems they did the trick and on I continued, feeling replete.
 
I felt absolutely fine and dandy until about mile 26 when I really started to feel tired. I had to fight the urge to just stop and walk. My general strategy so far had been to walk for 5 minutes at the end of each hour of running or whenever I felt I really need to give my legs a break. These five miles from 25 to 30 were different though – more of a mental battle really. My body kept going but my mind was weak, trying to talk myself into easing off. No way though! No time for such feeble thoughts, block them out, push onwards, just keep moving. As I neared 30 miles (as good a milestone as any) I could feel the doldrums were now behind me. A surge of energy arrived and I never looked back.

I was constantly motivated by the changing landscape of the river banks, the novelty of running such a long way and re-visiting places I’d previously seen on my Thames walk with Claire.

Passing under the M25 (about bang on mile 40 of the run) was pretty cool – it really gave me a handle on how far from home I was. Plus, it meant I’d really left the outer reaches of London behind and was now out in the countryside.

The final 7 miles into Windsor were pretty tough. I was alternating running with walking in the ratio of about 15 minutes to 5 minutes. It felt great to have come so far: 47 miles in 9 hours and 10 minutes. It felt like the right place to finish. It was time to catch the train home.
 
The Route: 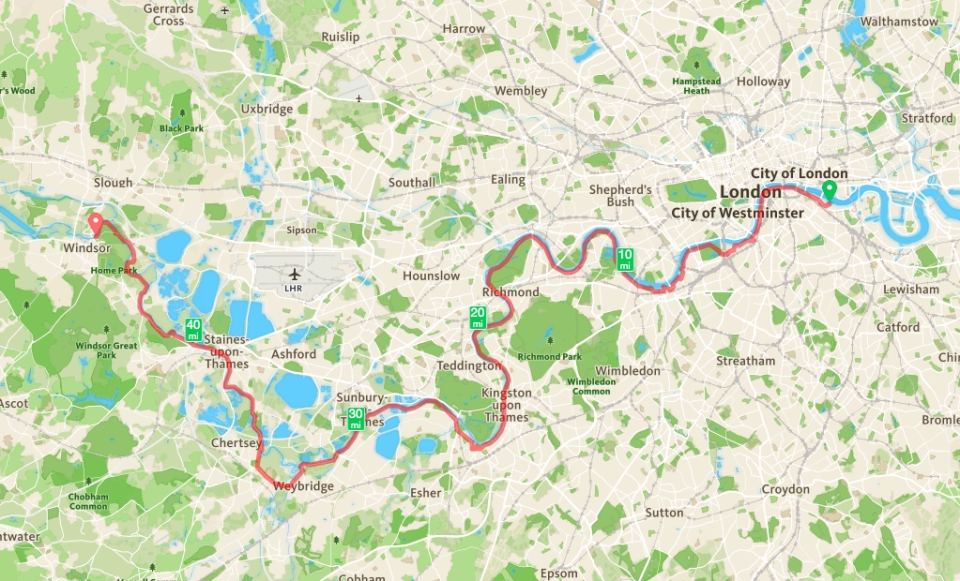 The full interactive route can be viewed on Runkeeper here.

I can’t sing their praises enough but the brilliant application from the people at Runkeeper on my iPhone was used to record the whole route, using GPS, and then plot it on Google maps. I was able to take all of the photos in this post using the camera on my iPhone. The battery life of the iPhone was extended to last the whole of the run with a 3rd party portable battery charger (the Kennington Portable Charger – another great piece of kit).